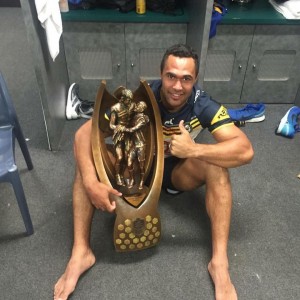 The Vanuatu Rugby League (VRL) remain determined to further cement their place in Pacific rugby league and they hope to use the exploits of Cowboys’ grand final-winning hero Justin O’Neill to do so.

With the announcement that Papua New Guinea will host matches of the 2017 Rugby League World Cup and the emergence of Tonga and Samoa has genuine challengers to rugby league’s traditional superpowers interest in Pacific rugby league has never been greater.

Vanuatu is one of the relative newcomers to the international scene but with a proud history of producing some of the game’s greatest talents represents a fertile breeding ground for rugby league.

The island is still recovering from the devastation of Cyclone Pam earlier this year but those behind Vanuatu Rugby League both in Vanuatu and in Australia are determined to see the annual Port Vila Fire Ants v Santo Boars game go ahead next month.

Playing opportunities for keen rugby league players have been scarce in Vanuatu this season which is why national coach David Simpson believes it is important that those who have been training for months actually get to take to the field.

“The Port Vila v Santo game will be a great showcase of the local talent we have in Vanuatu but we need sponsorship in order to make sure it goes ahead,” said Simpson, who takes over from Kim Williams as head coach of the Mackay Cutters in 2016.

“The locally-based players in Vanuatu have had very few opportunities to play this year but still they keep training and if we can’t provide regular games for them I’m concerned they will one day soon leave rugby league, the game that they love.

“Rugby league greats such as Mal Meninga have strong family ties to Vanuatu and we have to make sure that rugby league is given a real opportunity to grow and develop the fine athletes we regularly produce.

“With Papua New Guinea to host matches in the 2017 Rugby League World Cup Vanuatu Rugby League needs to strengthen its position over the next two years so that perhaps we can take part in warm-up matches with other Pacific nations.”

Named Most Improved Player at North Queensland’s presentation night last week, a maiden appearance for Vanuatu by O’Neill would represent a significant moment for the sport in that country.

His performances throughout the finals series where he scored two tries against the Storm and another in the grand final were followed closely by rugby league fans in Vanuatu.

Justin’s older brother Paul has already represented Vanuatu and Simpson is looking forward to the day when the pair and youngest brother Samsen all represent the Vanuatu heritage of their mother, Nicole.

“We’re so proud of what Justin has been able to achieve this year with the Cowboys and we’d love to think we will soon see him wearing the colours of Vanuatu in a Test match,” Simpson said.

“We have made significant strides in recent years and Justin has been a great supporter of our efforts but we need to push forward now so that there are more opportunities for Vanuatu to play international matches.

“We won’t have that opportunity this year but if the Port Vila v Santo game can go ahead then I’m confident that in 12 months time the Vanuatu national team will once again take to the field.”

This Saturday also sees Tonga play the Cooks Islands with the winner to qualify for the final Pacific spot at the 2017 World Cup with games to be played across Australia, New Zealand and PNG. The winner will join Australia, New Zealand, PNG, Fiji and Samoa that have already qualified from the Pacific region. The match can be live streamed on NRL.com.

Sunday’s Telstra Premiership Grand Final between the Broncos and Cowboys is not only dividing Queensland but also the tiny Pacific nation of Vanuatu.

The historic all-Queensland Grand Final will be played in front of an expected sell-out crowd of 83,000 at Sydney’s Olympic Stadium while millions more will tune in across 100 countries to see who will lift the Provan-Summons Trophy in 2015.

The blistering speed that saw Justin O’Neill score twice for the Cowboys in their Preliminary Final win over the Storm is largely attributed to his mother Nicole who hails from Santo and represented Vanuatu in the 100 and 200 metres at the South Pacific Games.

O’Neill has twice tasted grand final success previously at the Olympic Stadium, winning the 2012 NRL title with the Storm as well as under-20s premiership with Melbourne in 2009.

But O’Neill is not the only person involved on grand final day with strong ties to Vanuatu Rugby League.

Broncos high performance manager Jeremy Hickmans has played a key role working with and mentoring VRL’s head of high performance, Brett Wright, who has also trained a number of other national teams and was a coach for Vanuatu at the 2012 Olympic Games in London.

“It is fantastic to know we have Vanuatu connection on both sides of NRL’s biggest game,” said Vanuatu Rugby League president Tom Carlo.

“On one side we have a fantastic role model in Justin O’Neill and on the other side Jeremy Hickmans who is doing a lot behind the scenes for the VRL and providing Brett Wright with some fantastic professional development opportunities.

“Through the VRL connection, twice Brett has been given opportunities to spend time working with Jeremy at the Broncos and learn from the best.

“Not only will Brett be able to bring back what he has learnt to the VRL but it will also benefit Vanuatu sport as a whole where Brett can impart that knowledge to the other national and Olympic teams and athletes he works with.”

While NRL commitments and injuries have prevented O’Neill from making his debut for Vanuatu he has given up his time to act as a trainer and mentor younger players in the past.

When he makes his debut he will be the second O’Neill after older brother Paul to play for Vanuatu and it is expected the youngest brother Samsen will also debut in the coming years.

After Cyclone Pam devastated Vanuatu earlier this year the fledgling rugby league community has struggled to re-establish playing opportunities for keen footballers eager to channel their energies into rugby league.

The NRL and Queensland Rugby League were both significant contributors to UNICEF’s Vanuatu appeal in April and the VRL are determined to proceed with the annual clash between the Port Vila Fire Ants and Santo Boars in November. 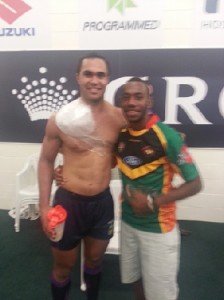