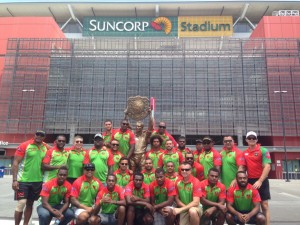 In a hard fought match, the Vanuatu Rugby League (VRL) lost an epic battle in their maiden match on Suncorp Stadium today (23 February 2014) versus the Sunshine Coast Falcons (44 points to 6).

The game started at a frantic pace as both teams played end to end football. Vanuatu had several early chances to score but were overcome by some strong Falcons defence.

It took a big shot by Santo raised front rower Herbie Henderson in the 30th minute to force a turnover and only 1 minute later the same player charged over from 10 metres out to score Vanuatu’s first and only try. It was converted by fullback Kunro Kalo to trail 16-6.

The Falcons with all the possession  on the back of an 8 – 1 penalty count scored just before half-time to head into the break up 20 – 6.

The second half started poorly for Vanuatu with a mistake off the kick off forcing a line drop out and a try to the Falcons in the 41st minute. The Falcons scored further tries in the 46th, 55th and 77thminute to run out convincing 44-6 victors.

The Vanuatu team despite being on the end of a lopsided penalty count kept trying all game and thrilled the crowd with big shots in defence and tireless work in defence. Centre Nelson Law and fullback Kunro Kalo were two of the strongest performers for a highly talented Vanuatu team.

The Vanuatu team were disappointed with the score line but not in the result and invaluable experience it gave to the players. Head Coach David Simpson commented ” I was really proud of everyone in the 24 man squad and the effort they put in today.”

“It is the biggest stage we’ve played on and considering most of the 12 players from Vanuatu were only playing in most cases their 3rd or 4th game of Rugby League at this level it is very pleasing.”

“We’ll continue to work hard and put as much time and resources as we can into our High Performance Units in both Port Vila and Santo in Vanuatu and continue to grow the game domestically as we work towards the end of year Test Matches and the Pacific Games and World Cup qualifiers in 2015″.

Vanuatu’s next fixture is expected to be one or two Test Matches in October.
Sunshine Coast 44 defeated Vanuatu 6 (Herbie Henderson Try and Kunro Kalo Goal).