Meninga, a descendent from Tanna Island was in Vanuatu along with Netball great Vicki Wilson as guest speakers at a Charity Sports Luncheon held by the Carbine Club of Vanuatu. Meninga was thought to be pleasantly pleased with the raw talent in Vanuatu and the development of the game so far in such a short space of time.

Campbell also ran a highly successful clinic for 14 to 18 year olds at Malapoa College that attracted in excess of 50 youngsters trying the game for the first time. As a result of both events, a number of players have been identified to come into the soon to be formed Vanuatu Rugby League (VRL) High Performance Unit.

For more information on how to get involved in Rugby League in Vanuatu you can contact VRL Official Leonard Ngwero on +678 7788992 or email vanuaturugbyleague@gmail.com, visit the website www.vanuaturugbyleague.com or follow the VRL on Facebook.

It was six straight wins for Justin O’Neill’s Melbourne Storm as they defeated the only other previously undefeated team the South Sydney Rabbitohs with a 17-10 victory to sit on top of the NRL ladder. O’Neill should return in the next week or two.

There are no NRL games this weekend as it is the representative round with Australia playing New Zealand in Canberra on Friday night, NSW and Queensland U/20’s playing their Origin fixture before the Samoa and Tonga game on Saturday night. NSW City also play NSW Country on Sunday to round out the representative weekend.

Samsen O’Neill played all 80 minutes on the wing for North Queensland Cowboys U/20 side that was narrowly defeated by the Brisbane Broncos 36-34 in Brisbane last Friday night. O’Neill ran 9 times for 119 metres, including 3 tackle breaks and made 8 tackles.

There are no U/20’s games this weekend due to the representative round.

Alehana Mara’s Auckland Vulcans had a strong 28 to 6 victory over Mounties despite Mara remaining sidelined with an ankle injury. The Vulcans have the bye in this weeks NSW Cup.

Jarvan White was the only player in action in the QLD Cup over the weekend with his Ipswich Jets suffering a 20-14 loss to Ben Henaway’s Souths Logan Magpies last Saturday in Brisbane. Henaway missed the match through injury in what would have been an early season shootout for the respective fullbacks fighting to claim the Vanuatu fullback position for the end of season Test matches. Vanuatu Captain James Woods Tweed Head Seagulls had the bye over the weekend.

Woods gets his first chance to impress audiences across Queensland as he starts at centre and co-captain of the Seagulls match against Easts Tigers which will be featured Live on Channel 9 Queensland on Sunday at Langlands Park (Brisbane, Australia) with the match to kick off at 2pm (3pm Vanuatu time). White will start at fullback in the Jets game against Northern Pride at Ipswich Reserve (Brisbane, Australia) on Saturday at 3pm (4pm Vanuatu time). Henaway remains out with injury.

In regional leagues throughout Queensland, Kunro Kalo was the standout with two tries in a man of the match performance for Townsville Brothers and if his development continues he is no doubt on a collision course for the Queensland Cup in future seasons. James Wilfred and Robert Franklin had strong games in Noosa’s A Grade victory over Maroochydore.

The first official tournament to be endorsed by the Vanuatu Rugby League (VRL) and run by the VRL – Shefa will take place on Saturday 13th April, 2013 at Kawenu.

The day begins at 8am, with registration from 8:30am and games commencing at 9am. National Head Coach and former NRL player Dane Campbell will be on hand to oversee the fixtures and cast his eye over the talent on display.

This is the final event Campbell is attending on this trip after holding a very successful coaching clinic for boys aged 14 to 18 on Thursday at Malapoa College and talking to numerous current and potential sponsors. Campbell also spent considerable time working with the VRL Board.

Justin O’Neill’s Melbourne Storm claimed their fifth straight win of the NRL season with a 26-12 victory over the Wests Tigers. O’Neill is expected back in the next few weeks from injury.

Younger brother Samsen O’Neill had a strong game starting on the wing for North Queensland Cowboys U/20 side that was defeated by the Penrith Panthers 32-20 in Townsville on Saturday night. O’Neill ran 10 times for 94 metres made 7 tackles.

O’Neill has been selected to start on the wing for the Cowboys U/20’s clash with the Brisbane Broncos on Friday night at Suncorp Stadium (Brisbane, Australia) with kick off at 5:15pm (6:15pm Vanuatu time).

In his first television game of 2013 last Sunday Ben Henaway’s Souths Logan Magpies defeated the Sunshine Coast Sea Eagles 36 to 10. Vanuatu Captain James Woods Tweed Head Seagulls defeated the Norther Pride 24 to 14 on Saturday. Despite scoring a try Jarvan White could not stop his Ipswitch Jets losing 20 to 16 to the Wynnum Manly Seagulls on Sunday

White is the only player in action this weekend with the Jets, starting at fullback against Souths Logan Magpies on Saturday at Brandon Park (Brisbane, Australia) at 7pm (8pm Vanuatu time). Henaway has missed selection for the Magpies, while Woods Seagulls have the bye.

In regional leagues throughout Queensland, all players had strong performances over the weekend.

Full results and team lists for NRL and the U/20’s National Youth Competition can be found at www.nrl.com

Full results and team lists for NSW Cup can be found at www.nswrl.com.au

Full results and team lists for QLD Cup can be found at www.qrl.com.au

CLINIC FOR TEENAGERS TO BE HELD THIS THURSDAY

Youth rugby league fans are encouraged to come and try the sport for themselves under the expert tutelage of a previous NRL pro.

Vanuatu Rugby League (VRL) National Coach and former NRL Player Dane Campbell will also be in Vanuatu this week to cast his eye over Vanuatu’s younger players with a view to discovering the next Kunro Kalo.

Campbell’s visit coincides with a visit to Vanuatu by Rugby League legend Mal Meninga, courtesy of the Vanuatu Carbine Club, and the Port Vila 9’s being played this Saturday.

The VRL will be holding a coaching clinic for any interested players aged 14 to 18 at 4pm on Thursday 11th April at Malapoa College. Campbell was very excited about conducting the coaching clinic.

“I can’t wait. Every coaching clinic I have held has been well attended by an enthusiastic group of players.”

“In previous clinics we’ve identified players who have then gone on to represent Vanuatu in 9’s in Australia, in our inaugural Test match vs Greece last year and in the Vanuatu-South Sea Islander team and several of those players are still in Australia having been recruited to club sides throughout Queensland”.

“It’s great we’ve provided opportunities for those players but I’m even more excited about potential opportunities we can provide younger players.”

Campbell added “No previous Rugby League experience is necessary and I’d encourage anyone from 14 to 18 that is interested in Rugby League to come down and try Rugby League for themselves”.

VRL President Tom Carlo added “I’d encourage all interested players to come down to Malapoa College on Thursday at 4pm and give the game ago. You can’t get a better person to learn the game from that our National Coach and a former NRL player in Dane Campbell.”

Any interested players should be at Malapoa College, dressed and ready to start the clinic by no later than 3:45pm. For more information please contact VRL Official Leonard Ngwero on +678 7788992. 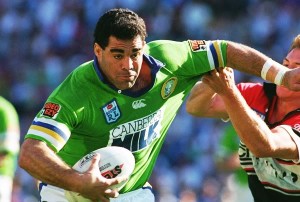 In a major coup for the Vanuatu Rugby League (VRL), Rugby League legend Mal Meninga will attend the Port Vila 9’s on Saturday 13th April, 2013. Meninga as a guest speaker at a Charity Sports Luncheon held by the Carbine Club of Vanuatu along with netball great Vicki Wilson.

Meninga has close ties to Vanuatu, with his ancestry tracing back to Tanna Island. Meninga’s nephew, Joey Meninga has played for Vanuatu both in 9’s and started in the second row for last October’s highly successful Test Match vs Greece.

Meninga is best known as a goal-kicking centre and regarded as one of the finest players of the 20th century having been selected in both the Queensland and Australian Teams of the Century. Meninga began his career in the Queensland Cup with Souths Logan Magpies, the same club as current Vanuatu player Ben Henaway where he won two Premierships before playing in England with St.Helens where he also won a Premiership.

Meninga is best remembered for his time in the NRL where he played 166 games for the Canberra Raiders, captaining them to three Premierships and five Grand Final appearances. Meninga also played 32 games for Queensland (9 as captain) which included numerous series victories and 46 games for Australia (23 as captain) including winning the 1992 World Cup.

Following retirement in 1994, Meninga coached the Canberra Raiders for five seasons. Meninga is the current coach of the Queensland State of Origin teams where he has won the last seven series in a row, aiming for an eight in 2013. Meninga is also the High Performance Director for the Papua New Guinea Kumuls leading into this year’s World Cup in England at the end of the year.

Justin O’Neill’s Melbourne Storm remained undefeated with a 32-26 victory over the Brisbane Broncos. O’Neill is expected back in four weeks.

Younger brother Samsen O’Neill’s started on the wing for North Queensland Cowboys U/20 side that was defeated by the New Zealand Warriors 25-6 in Auckland on Monday, in a match televised by Fox Sports. O’Neill ran 8 times for 81 metres, including 2 tackle breaks and made 8 tackles.

O’Neill has been selected to start on the wing for the Cowboys U/20’s clash with the Penrith Panthers on Saturday night at 1300Smiles Stadium (Townsville, Australia) with kick off at 4:15pm (5:15pm Vanuatu time.

In his first television game of 2013 Jarvan White starred as his Ipswitch Jets defeated the Easts Tiger 28-10 in Brisbane on Sunday. On Saturday Ben Henaway’s Souths Logan Magpies were defeated 50-16 by the Northern Pride in Cairns. Vanuatu Captain James Woods Tweed Head Seagulls were comprehensively beaten 24-0 by the Redcliffe Dolphins in Brisbane on Sunday.

Henaway will start at fullback for the Magpies clash with the Sunshine Coast Sea Eagles at Davies Park (Brisbane, Australia) on Sunday at 2pm (3pm Vanuatu time). The match will be shown LIVE on Channel 9 Queensland.

In regional leagues throughout Queensland, there were no games over the weekend due to the Easter break. In other news Patrick August is in high spirits as he awaits an operation after suffering a season ending knee injury playing for Souths Mackay two weeks ago.

Full results and team lists for NRL and the U/20’s National Youth Competition can be found at www.nrl.com

Full results and team lists for NSW Cup can be found at www.nswrl.com.au

Full results and team lists for QLD Cup can be found at www.qrl.com.au