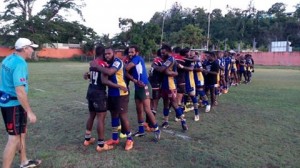 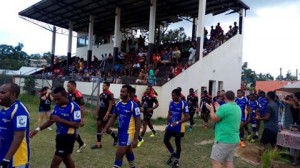 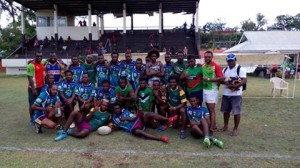 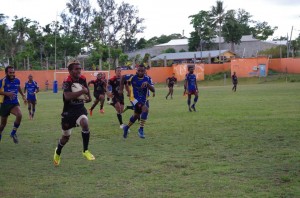 The Port Vila Fire Ants and Santo Boars are playing for much more than pride on Saturday December 12; they are playing to secure the future of rugby league in Vanuatu.

The Fire Ants will host the Boars in the capital Port Vila this Saturday seeking a fourth consecutive win over the Boars but more importantly to take up a rare opportunity to play the game that they love. This match has been rescheduled after the Fire Ants were left stranded in Port Vila after several cancelled flights meant the team was unable to travel to Espiritu-Santo for the planned fixture in November.

The fourth meeting between the two representative teams could not have come at a more important time as the after-effects of Cyclone Pam and exclusion of the Vanuatu Rugby League team from the Pacific Games in Papua New Guinea has made it next to impossible for any rugby league to be played on the Pacific island in 2015.

In recent years the Vanuatu national team have played matches against the Solomon Islands, Niue, Greece and the Philippines but no international opposition could be found in 2015, making the annual Port Vila-Santo clash one of critical importance.

“It has been a struggle but we’ve managed to get the game to go ahead on the 12th which we see as the re-launch of sorts of the game in Vanuatu,” said Vanuatu Rugby League president Mr Tom Carlo.

“If the game had not gone ahead we had grave concerns for the future of the game at a domestic level and full credit must go to both the Fire Ants and Boars who have ensured this fixture happened despite the many setbacks.

“By not being able to participate in the Pacific Games this year we lost a lot of the momentum we had built up in recent years so it was imperative for the continued development of rugby league in Vanuatu that this game went ahead.

“It hasn’t been easy and it has taken a great deal of dedication from both players and officials but we’re delighted that on Saturday we will once again see the Fire Ants and Boars do battle.”

“Considering they have had very few opportunities to play this year the dedication of the boys from both teams to keep training and developing their skills has been tremendous,” said Brett Wright, strength and conditioning coach for the Vanuatu national team.

“Given the efforts they have made this year to not have staged this game would have been devastating but now we can look forward to a quality contest between two teams who simply love their rugby league.”

Not yet a full member of the Asia Pacific Rugby League Confederation, Mr Carlo said that Vanuatu Rugby League will do everything it can to make sure the national team is once again given the opportunity to represent Vanuatu in 2016.

“We have been heartened by the progress of the likes of Samoa, Tonga and the Cook Islands since the 2013 World Cup and we are determined to also represent the Pacific in international rugby league,” Mr Carlo said.

“There is no question this has been a difficult year but we have the players and the passion to move the game forward.

“On the back of Saturday’s game between Port Vila and Santo we are confident that Vanuatu Rugby League will emerge bigger and better in 2016.”